After a great cup of coffee with Scott and Amanda we started our day with a huge climb straight out of town. The view was wonderful and had a nice easy ride into Ennis where we had breakfast. Met a gentleman who said it was a great day for cycling and hoped we wouldn’t get much headwind but his wishes certainly did not come true for us.

We had the most terrible headwind we have ever had the misfortune of riding and it lasted for the rest of the day (115 km) with continuous climbing. We had a hard time maintaining over 10 km/hour on the flats.

At one point we were coming to the top of a small hill when the gusts of wind were so strong that we were blown into the barricades which prevent cars from going into the canyon below. We had to ride real slow and carefully for a while the gusts were this strong.

As we got closer and closer to Yellowstone the views became more and more scenic. Beautiful snow-capped mountains on one hand and rolling hills in the other.

Signs indicating bison and other animals crossing the roads are becoming more and more common.

Finally managed to reach West Yellowstone where we got a motel room which we feel we fully deserve 😀. Met a young guy who we had passed yesterday. He was walking ‘as far away’ as he could. Real friendly guy in a cowboy hat and boots. Had hitchhiked and made a new friend. 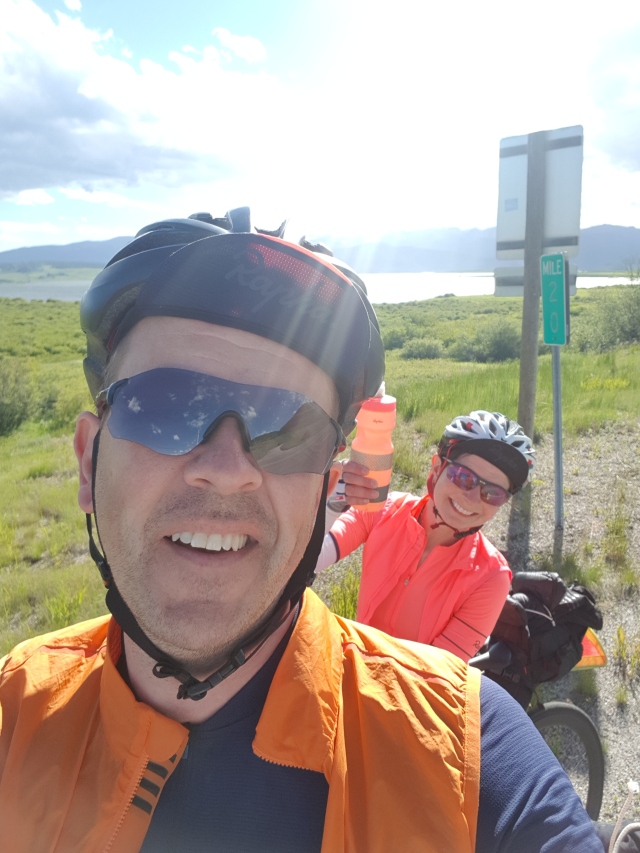